The 20th meeting of CAWTAR’s Board of Trustees 2020

On Wednesday, February 12th - February 2020, in Tunis, the meeting of the Board of Trustees of the Center for Arab Women for Training and Research (CAWTAR) was held in its twentieth session, in the presence of high-level representatives from the Arab Gulf Program for Development (AGFUND), the Minister of Women Family Childhood and Seniors, the League of Arab States (LAS), The United Nations Population Fund (UNFPA), the United Nations Development Program (UNDP), the International Planned Parenthood Federation (IPPF), the United Nations Entity for Gender Equality and the Empowerment of Women (UN Women) as well as representatives from International donor institutions such as GIZ, and the Arab Development Bank in Africa as observers.

The year 2019 was marked by the publication of the seventh AWDR Arab Women Develepment Report on “Gender Equality in the 2030 Agenda: The Role of Civil Society and the Media” and the practical guide on the same issue, which includes 44 field initiatives carried out by civil society organizations from 17 Arab countries and some regional experiences, in connection with all goals On the agenda, the knowledge interest for the years 2020-2021 will focus on the topics of "Arab women and girls in technological science and innovation" and "women influencing social networking sites."

HE. Mr. Yousef Al-Bassam, Vice-Chairman of the Board of Trustees of the Arab Gulf Program for Development, the main supporter of the center, praised the qualitative shift in the activities of the "CAWTAR" and its interventions in the Arab region and beyond, praising the strategic orientations of the Center, especially in its link to the 2030 Development Agenda.

Mr. Nacer Al-Qahtani, Executive Director of AGFUND, expressed his pride of what the "CAWTAR" has achieved over many years towards achieving the comprehensive empowerment of women in the Arab region. He expressed his committment to continuing to support the center, and called on the partners to support "CAWTAR" in its work aimed at advancing the status and rights of women. He pointed out that "there is no sustainable development without empowering women." Various members have also praised the Center’s institutional mechanisms, namely the Financial Inclusion Center, the Media Training Center, and the Reference Center for Information Exchange « cawtarclearinghouse platform ». Dr. Haifa Abu Ghazaleh, Assistant Secretary-General and Head of the Social Affairs Sector at the League of Arab States, appreciated the geographical extent of the Center's interventions, noting its progressive course of achievements.

It is noteworthy that during the year 2019, CAWTAR completed 9 studies, two regional reports, 7 national reports, and 3 practical guides, in the fields of: women's transformative leadership, political participation, gender, trade, the 2030 agenda, violence against women in public spaces, and the integration of a gender perspective in the film industry, it also has also conducted 57 training sessions, and all its activities directly targeted more than 1500 people in the Arab region and beyond. 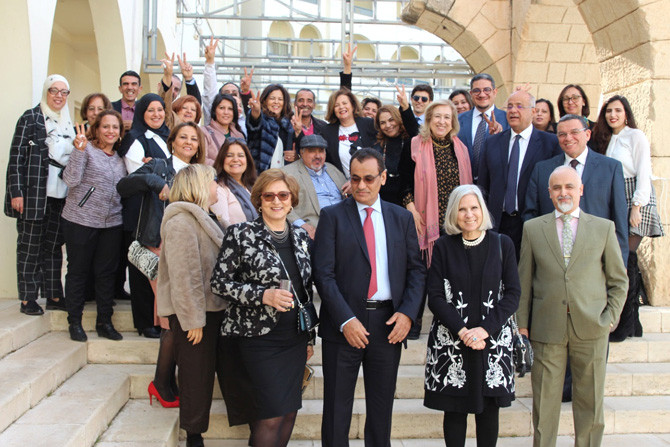